I went to see the musical "Avenue Q", and I was impressed with it. I thought that because they had muppets inside that it would be a childish show, although many peer reviews and other people who had seen it told me that this was far from the case. It is not childish. It is a very mature show that takes a childish attitude in telling the lives and stories about people living on 'Avenue Q'; what that means is that the story is adult, but the way it is depicted is a little bit childish, which makes this work. Otherwise, it would have just been another run-of-the-mill musical. 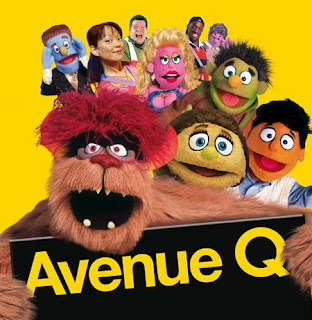 If you ever get a chance to watch it, I recommend it for it will make you laugh your ass right off your backside.